Back to Work on the Mini House

It has been some time since I showed any progress on my dollshouse and after been inspired by Ann and her lovely dollhouse blog, I have restarted the challenge. 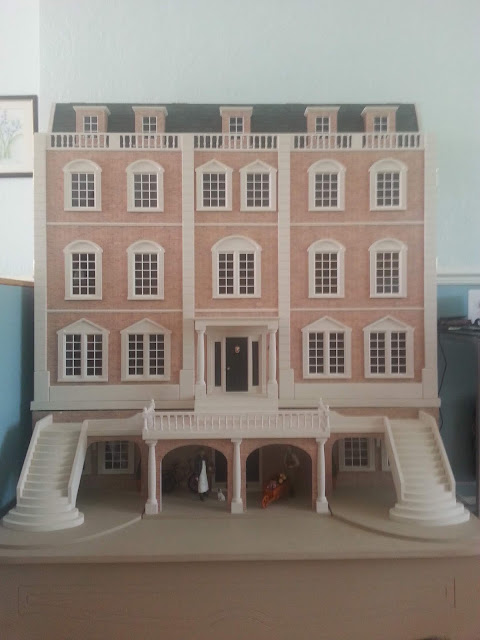 The house is in a Georgian style on the outside but the inside is closer to the late Edwardian period - at least, that is the rough idea.

I started with the basement of the house and finished the lower hall, and the sculleries. The butlers area was also almost finished but then things ground to a long halt. 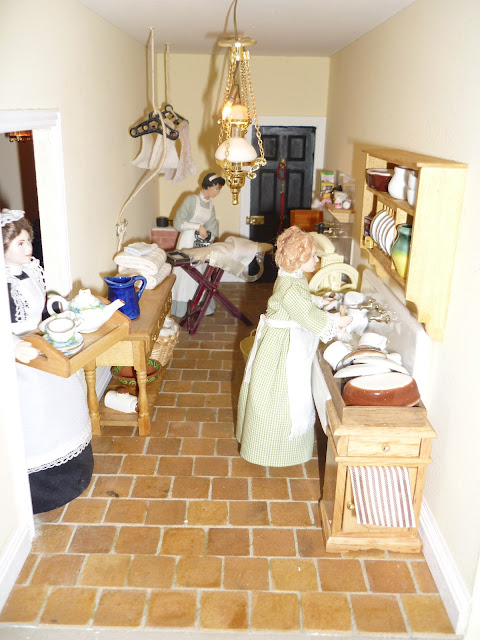 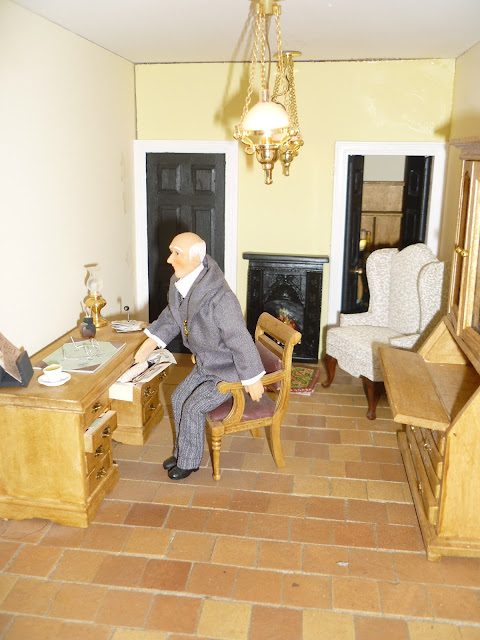 So, now I am carrying on.

The front section of the dollhouse comes away in three sections to reveal the inside. While I had started on the fronts, the inside walls of the rooms looked like this. I have painted this inner wall to match the room and added some skirting. The skirting is paper glued so the front can close properly without catching on the tiled flooring. Hubby made some tiny pelmets, and we fixed them and the sills to the window frame. I also made some simple curtains and glued them in place. 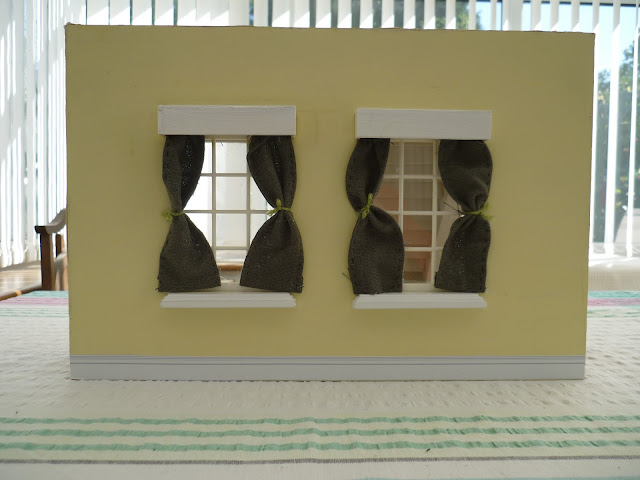 I just have the other two basement pieces to finish off in the same way now. 😃

I hope you all have a lovely week. Take care x

Posted by meandmysmallcorner at 19:13 6 comments:

Hope you have all had a good week.

We have had this rather large canvas picture hanging on a wall in our lounge for several years, but it has never really fitted into the decor. It was one of the spur of the moment buys that just blended onto the wall rather than enhancing it.

During the week, it was removed from its place in the living room and given a picture lift. I bought a couple of shimmery acrylic paints and highlighted the leaves and centre of the flowers.

I wanted to make the picture stand out a little more, so I asked hubby to make a frame. He kindly made one up, and I stained it with an oak varnish. It is now on the wall in our bedroom, and I am very happy with the results 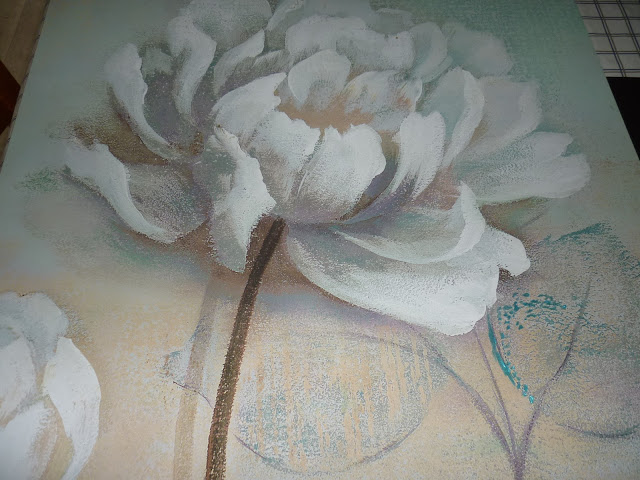 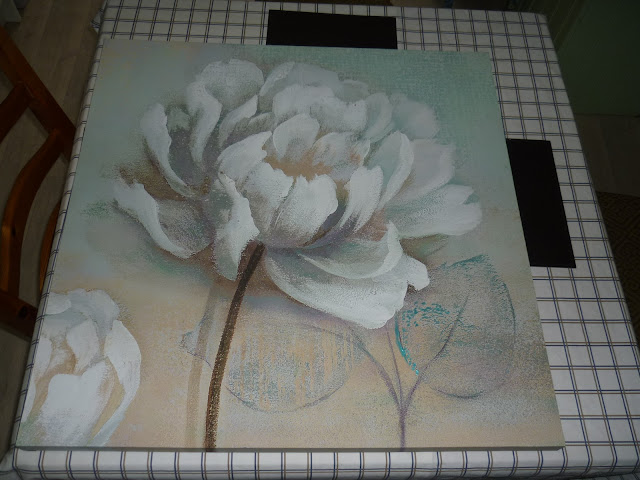 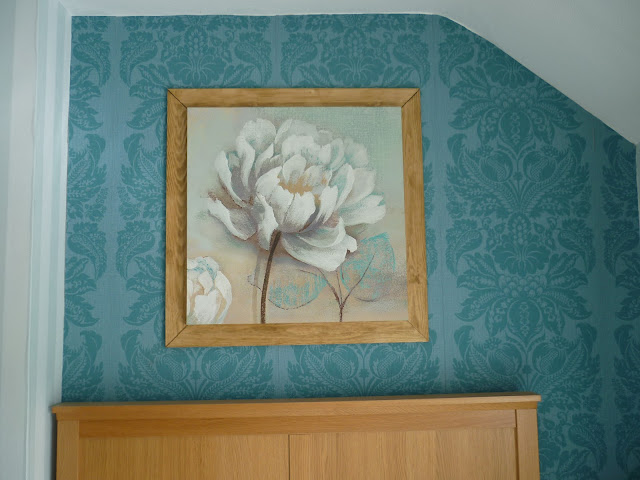 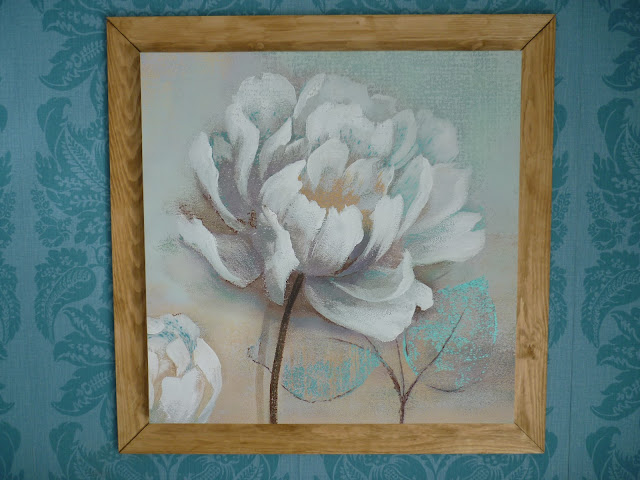 D has been busy again in the kitchen: baking some wonderful cupcakes.

She is a big fan of Jane's Patisserie, and the cakes D has made were from there. First were some lemon drizzle cupcakes. Sorry, no pictures as they disappeared very quickly. They were delicious and were a different slant on the traditional lemon drizzle cake/loaf.

Today she made peanut butter and jam (jelly) cupcakes. The combination of jam and peanut butter sounded strange, but oh my goodness, it worked so well. My contribution was making the holes in the centre for the jam. My idea was to use an apple-corer to scoop out the cake mixture. It worked perfectly, leaving a jammy centre, which D topped with a peanut butter frosting. They were so delicious that we forgot to put the raspberries on as the finishing touch. Maybe we will remember to do this with the remaining cakes.

I am looking forward to what she tries next, and so is hubby. 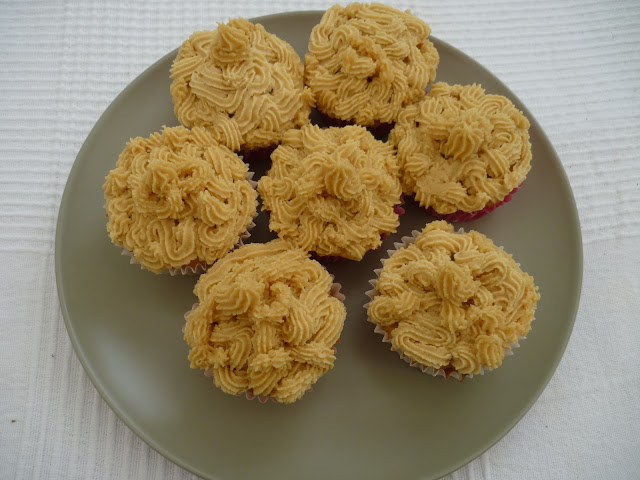 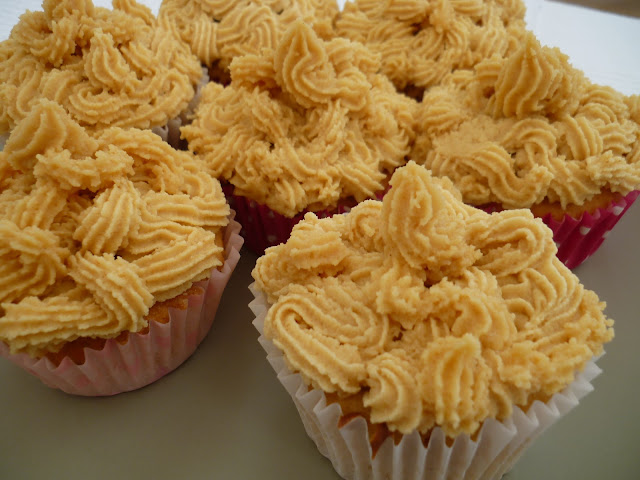 Tomorrow will be a special and reflective day for many of us in the UK and around the world as the State Funeral of Her Majesty Queen Elizabeth II takes place in London. I will be watching with D and Hubby.

After that, there is the week ahead, and I hope you have good one x

Posted by meandmysmallcorner at 21:42 18 comments:

In light of the events over the last few days, I have decided not to post a normal blog this week.

As we mourn the loss of Her Majesty, Queen Elizabeth II, we can reflect in our own way.

Thinking of you all this week.

Posted by meandmysmallcorner at 13:28 4 comments:

The Job List That Never Seems To Get Shorter!

As I write this, the rain is pouring down outside with intermittent gaps of sunshine. It seems that is the forecast for the next week, but the garden will be glad of the water, and the butts will be filled up to be used later.

This week has seen us starting or finishing several jobs in the house from the long list we have. Why does this list never get shorter?

First on the list was something that has been on my mind for some time. The front end of our living room has a bay window which is only partly boxed in: this had been fine with curtains, but now I really want to add some vertical blinds. The problem was how to fit them with the current arrangement.

G has been chopping, sawing and screwing wood together (all those come in handy one-day bits of wood) in the garage to make the proposed window dressing work better. I'm really happy with the result and can now start thinking about ordering blinds. The room needs redecorating in the Spring, but that is much further down the to-do list. 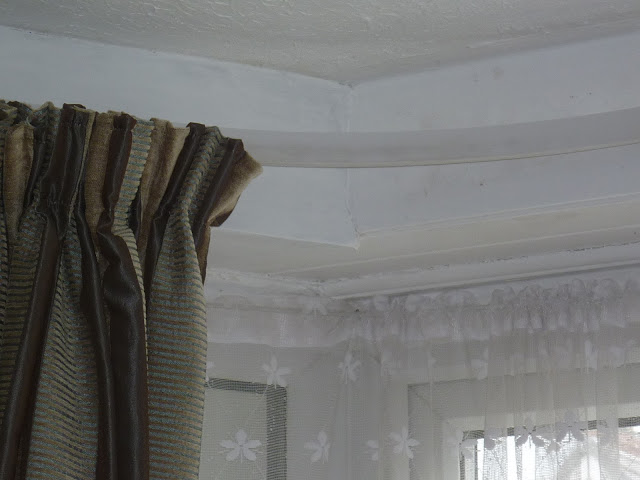 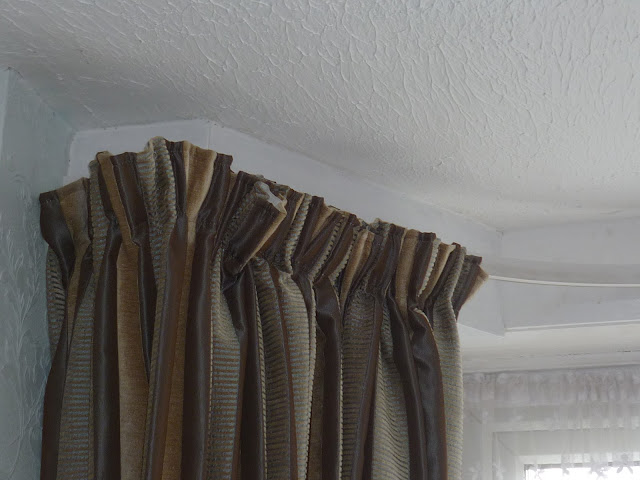 Our next job came after a trip to Ikea. I already have some of their spice jars and wanted a few more. I had asked G if he could make me a shelf to hold them, but we found the perfect shelf while we were out. G only needed a few screws to fit it, and it was just right. It was labelled as a picture frame rail, but I think it makes a perfect spice rack. 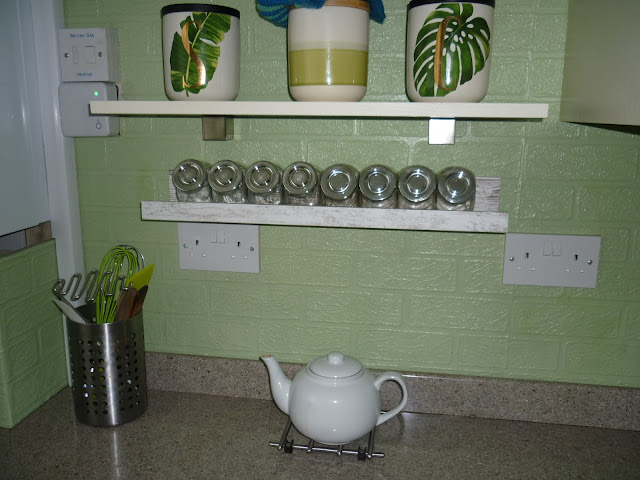 Our bathroom is slowly taking shape, and the next job was one I could do mostly myself. The frame around the window was put up a few weeks ago but needed a little more decoration. I used some mosaic tiles that D had left over from a craft project and a bag of seashells and glued them around the window. :-) 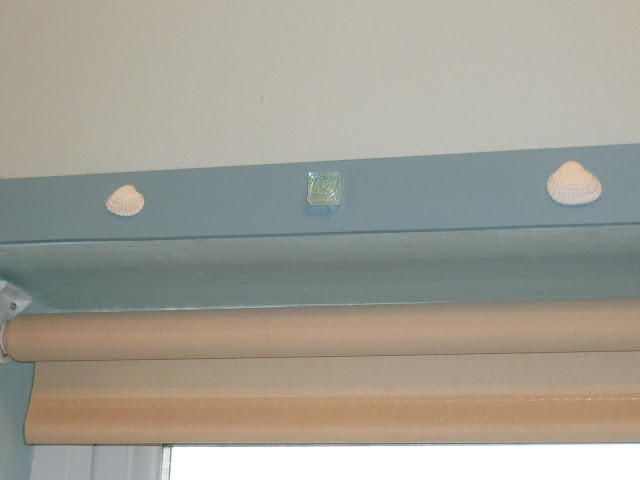 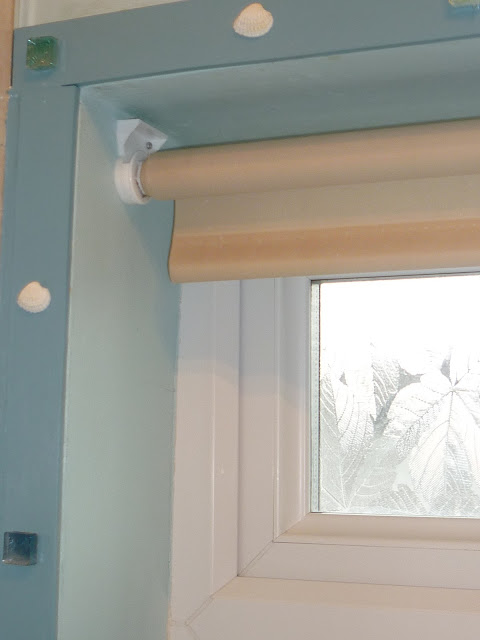 Although we installed our kitchen only a few years ago, I am still tweaking it bit by bit. One of the colours I chose for the walls has turned out to be too pale and, to be honest, shows finger marks very easily. I picked up a few tester pots yesterday and have put them on the wall so I can decide which works best. 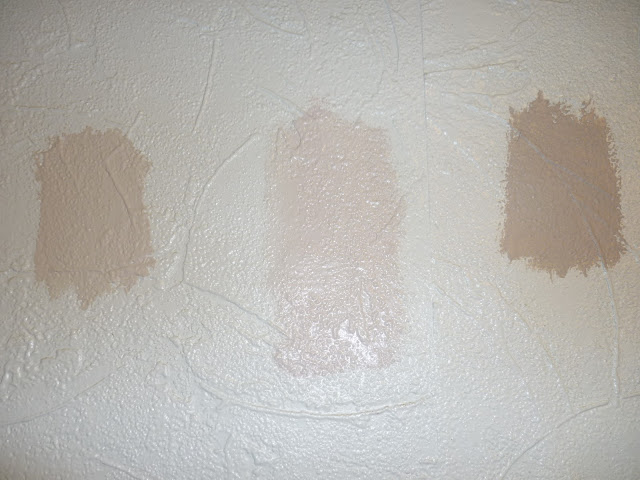 I also managed to complete the first piece of my four-part cross stitch project this week The first picture is of some spring flowers. 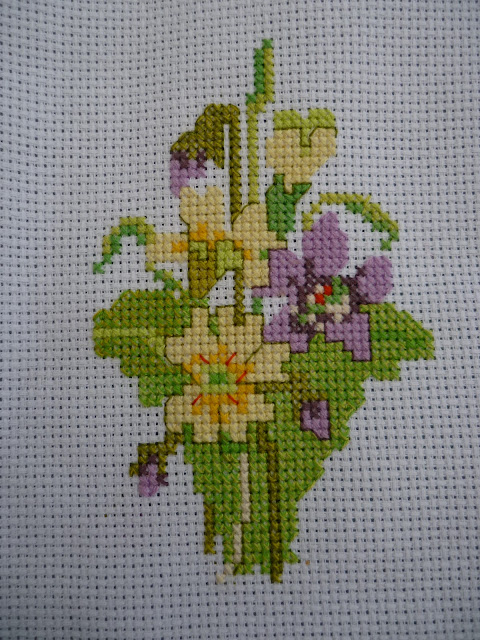 Between the rain showers, there is still plenty to do in the garden and the house. Well, that list is not getting any shorter, but it is enough to keep me out of trouble for now.

Have a lovely week, all of you x

Posted by meandmysmallcorner at 16:38 19 comments:

Off To Yorkshire Part 2

Continuing our holiday travels in North Yorkshire, we did what lots of tourists do and took a ride on the city sightseeing bus. The guide was very entertaining and pointed out a number of places of interest around the city. There are several places that we would like to see on our next 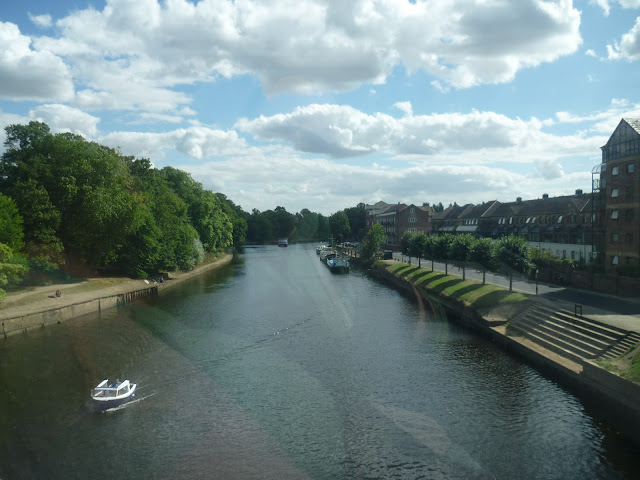 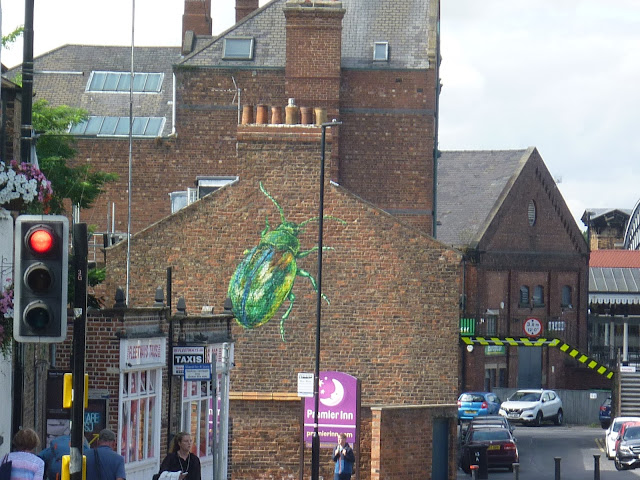 An image of the York Tansy Beetle 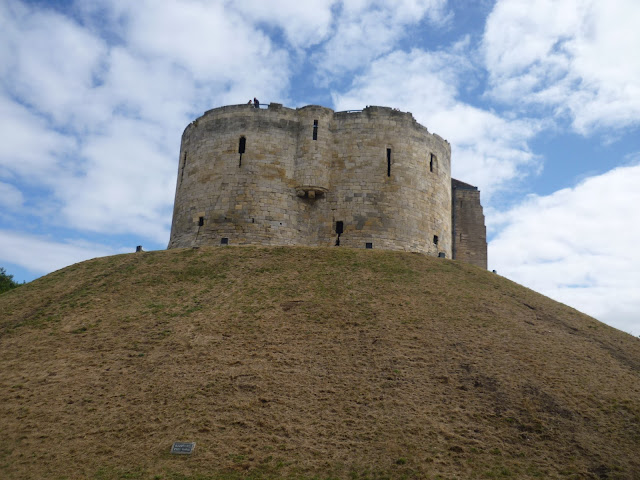 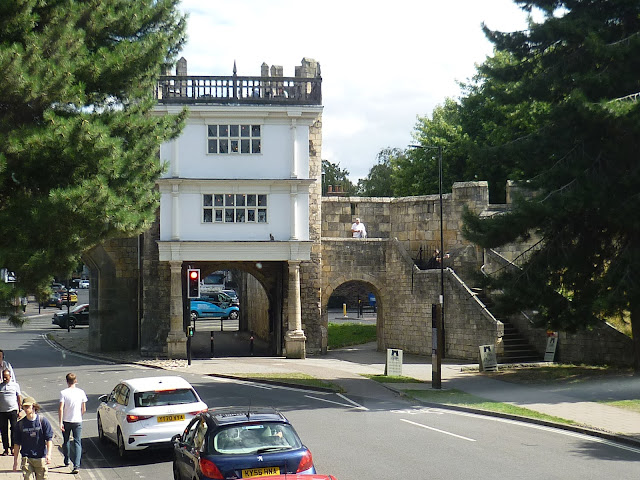 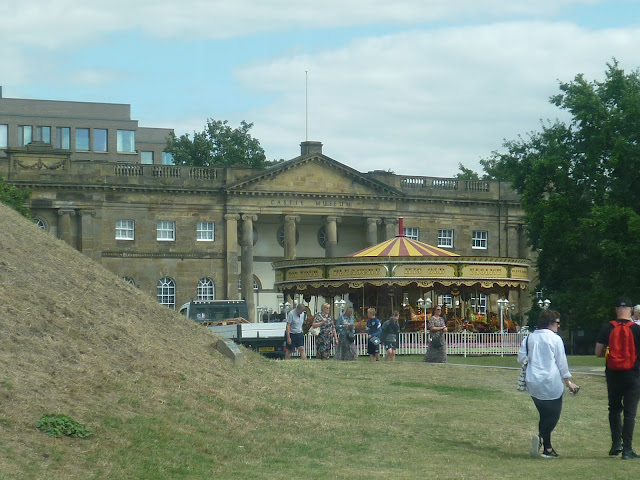 One of the places mentioned by the guide was York Castle Museum: this was a fantastic place to visit. It used to be a former prison, and one of its most famous inmates, Dick Turpin - the highwayman, was held there before his execution.

The exhibits displaying 400 years of fashion, food and life were also interesting; they included parts from the 1960s, which were large parts of my childhood. It was fun showing D some of the things that were around when I was growing up.

We also enjoyed walking through Kirkgate, which is a reconstructed Victorian street. It told the story of ordinary people, where they lived and worked - a social history of the time. A life-sized Hansom

cab in the centre of the street was a fitting image of the times. I loved

looking in the shop windows and seeing all the things on display.

We could have spent so much longer in this museum. I could easily visit

Nunnington Hall and Kedleston Hall were two other National Trust places we visited while away, each very different to the other.

Nunnington Hall felt more homely with renovations and decorating overseen by the former lady of the hall, Margaret Fife. Her little notes about what she liked and wanted to change were engaging. 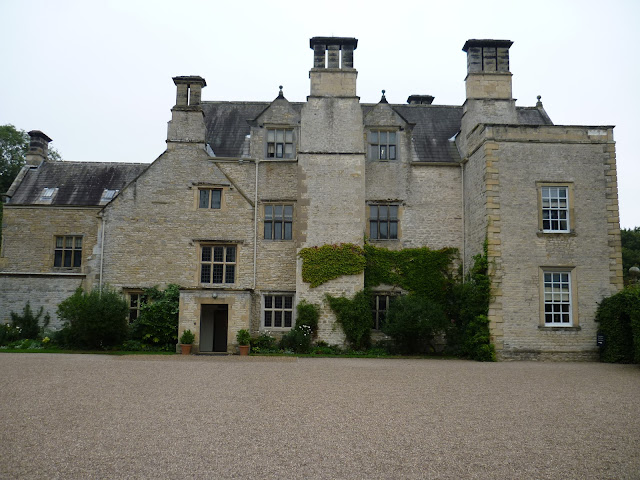 In contrast, Kedleston Hall certainly had the wow factor with vast pillars like an ancient Roman villa and had decorations in every room that were rich and vibrant. It was a place to show off wealth and status but maybe not to be lived in. I enjoyed visiting both halls. 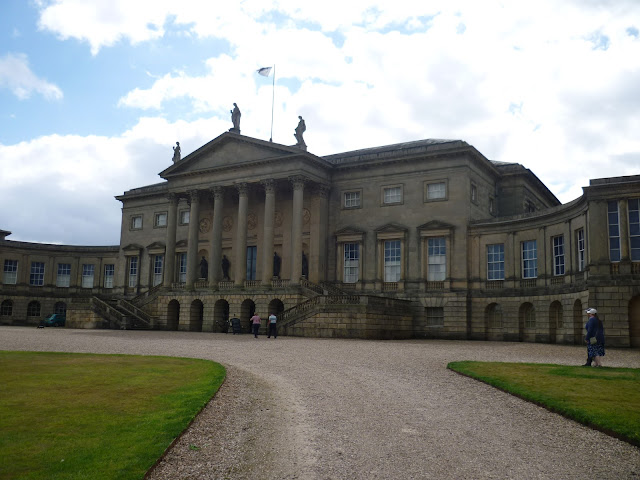 Back to reality in Birmingham, holiday washing has now been completed, and everything is put away again. I'm glad we had some sunny days this week as well as the rain on Thursday so that I could dry everything outside on the line.

There is no break this week, though, as it has been birthday week for hubby, our daughter and our son. It's definitely 'Cake Week' here in this small corner, and no diets. We went out a couple of times for celebratory meals as well.

This was D's birthday cake. Just a fun sponge from the local shop, but it was just what she wanted. 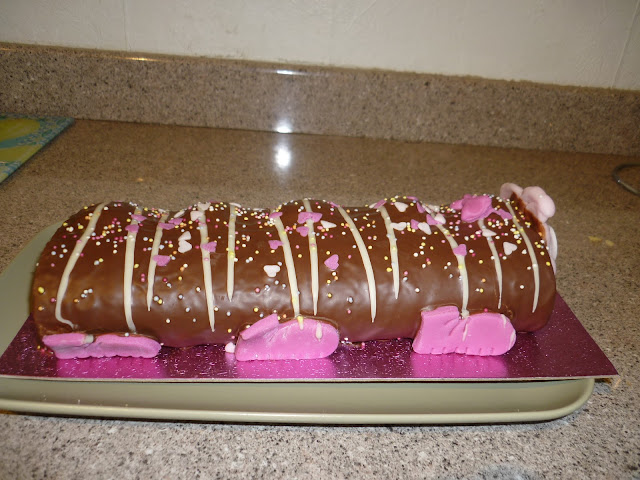 D has been making mint chocolate fudge this week, and we are all enjoying the sweet treats. It doesn't last very long here, so this is how it looked after several pieces had been eaten :-)

This is her quick recipe:

A few drops of peppermint essence

Heat the condensed milk gently in a saucepan, and melt the 500g of chocolate into it. Don't let it boil though. When it has all melted, add the essence to the mixture. Take the saucepan off the heat, add about half of the choc mint sweets and mix them into the fudge.

Now pour the fudge into a deep lined baking tin and add the remainder of the chocolate sweets to the top of the fudge.

All that remains is to put in the fridge for few hours hours, and then enjoy! 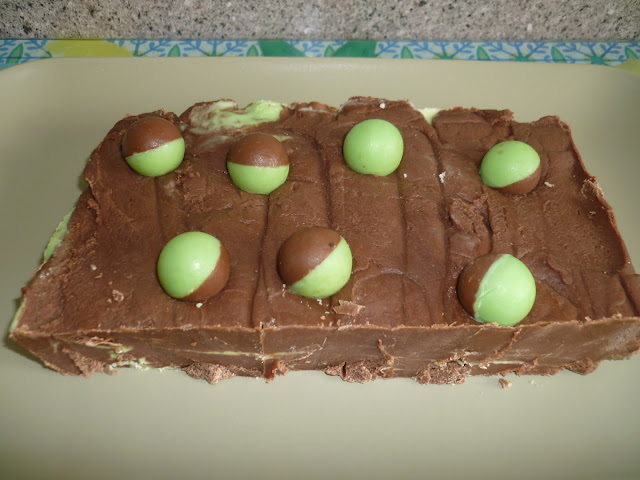 I noticed that the leaves on my beetroot looked a little sad and weather-worn in the garden, so I decided to dig up the harvest early. I made pickled beetroot several years ago and have done the same again this year. Pickling was very easy, and I now have some lovely fresh jars of beetroot. 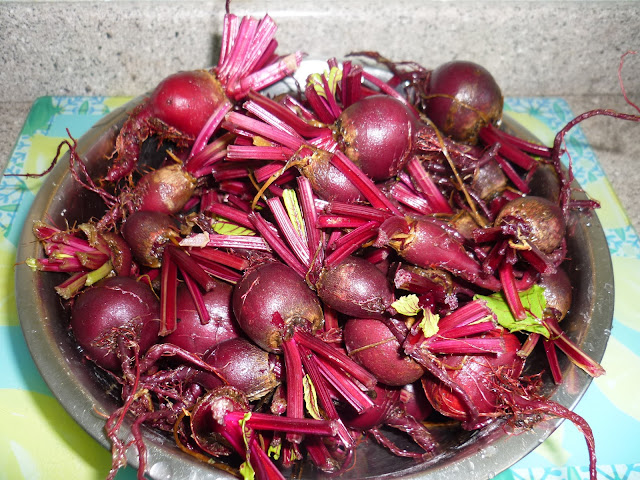 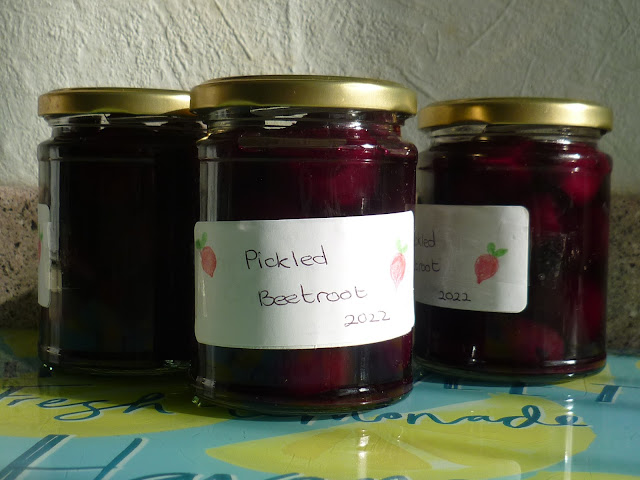 I don't have plans for this new week yet but I'm sure there will be plenty to do here both inside and out. Do you have anything special planned for the week? I would love to hear about them.

Take care everyone and have a great week xx

Posted by meandmysmallcorner at 19:05 14 comments:

meandmysmallcorner
Hello, my name is Beverley and I live with my husband Graham in our home on the border between Birmingham and Worcestershire. I love all kinds of craftiness, gardening, travel and the renovation of my enormous dolls house. My children are all grown up now but I want share this place of memories with them and you. Thank you for spending time here and inspiring me on this journey.